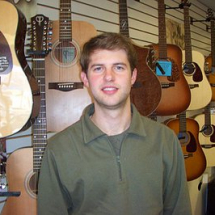 Robert Gailey's music career started at age 7, when he started taking private piano lessons. After excelling four years of piano and music theory he decided to explore other instruments. Robert spent two years playing cello with his school's orchestra and discovered his love of stringed instruments.

During the time Robert was playing in the orchestra his twin brother Richard was playing percussion in the school band. The two of them enjoyed playing music together. Robert soon found his profound passion for the guitar. At age 15 he was already writing original music with an alternative rock band that he created with his brother. During high school Robert participated in a number of music competitions, concerts, and also accomplished an advanced music theory class.

After High School, Robert majored in Jazz Performance at the University of Utah. He studied with distinguished artists such as Geoff Miller and Kevin Johansen. He played in the advanced guitar ensemble at the University for three years. While studying, Robert began teaching private lessons to more than thirty students from all levels, ages, and backgrounds. Robert found a very special interest in teaching music and has been a doing so since 2010.

With his brother, Robert also decided to create a music program where their private students, along with musicians in the community, could come together to learn, rehearse, and perform music together. Richard and Robert Gailey founded Utah Jam Bands in 2012. Since its founding, Utah Jam Bands' annual camp has nearly doubled in size and continues to be a gratifying experience--not only for the 40+ students, but for their families and instructors as well.

Robert offers a variety of general music, piano, and guitar courses that provide exceptional music instruction. His teaching methods are flexible to each student's level, age, and individual interests. His teaching curriculum uses several Hal Leonard method and theory books along with personalized methodology including: theory, technique, improvisation, composition, chord extensions, scales, etc. Robert believes that every student can exceed and even play professionally if they put the right amount of time, effort and passion into his programs.