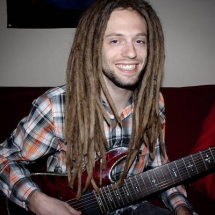 Riley Brodersen began playing guitar when he was 12 years old,
and he has had a love for music ever since. His earliest
influences came from classic rock music like Led Zeppelin and
Black Sabbath. During high school, Riley played in bands ranging
from original rock groups to working cover bands, and became a
notable guitarist in his local area in Nebraska. He also began
teaching private lessons independently and at a local music store
while still a teenager. After working as a musician and teacher in
the midwest area, Riley moved to Los Angeles, CA, to attend
Musicians Institute, where he graduated with an AA degree in
Guitar Performance in 2012. While at MI, he gained invaluable
experience and knowledge learning from top musicians from all
over the world. Through his experience, Riley was introduced to
new music from many genres and discovered a love for
jazz/fusion, funk, and r&b. Studying and performing a wide
range of music has made him proficient in many different styles,
and in 2012, his band was the winner of Musicians Institute's pro
performance award.

After graduating from college, Riley began teaching in-home
lessons and working as a performing and recording musician in
the Los Angeles area. He maintained a busy teaching schedule
working with a wide variety of students for four years, before
moving to Denver, CO, in November 2016. Riley truly loves
teaching music. He believes that learning music should be a fun
and rewarding experience. His teaching method is encouraging
and the goal is for students to have fun playing music they enjoy
while improving their skills and learning new information and
techniques. He keeps lessons fun and engaging by focusing on
each student's interests and skills. Riley enjoys teaching students
of all ages and skill levels.

Differences Between a Piano and a Keyboard