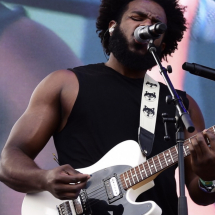 Regi Drake is a touring/session guitarist, producer, and band mate based in Seattle, Washington. He has been a part of 7 tours nationally and internationally, playing with artists such as Alice Merton, Alex Wiley, Lofts, OMEN, and more. Regi has performed in venues and festivals such as Red Rocks Amphitheater, The Greek Theater, Eagles Ballroom, Coachella, Austin City Limits, South by Southwest, Bottlerock, Firefly, Governors Ball, Shaky Knees, Hangout, Corona Capitol Mexico City, Exit Festival Serbia, and Rock En Seine, to name a few.

In addition, Regi has had television appearances on Jimmy Kimmel, James Cordon, Live with Kelly and Ryan, Good Day New York and others. He has opened for many mainstream artists like Vance Joy, Young the Giant/Fitz and the Tantrums, Bilal, India Arie, BJ the Chicago Kid, Brick+ Mortar, Green River Ordinance while on tour and one-off shows.

Regi attended Columbia College Chicago for a Bachelor of Music in Contemporary Urban Popular Music, which gave him the opportunity to study abroad at the Popakademie of Mannheim, Germany, share the stage with greats like Paula Cole and Lisa Fischer, record at studios such as the Chicago Recording Academy, and form his own project, Lofts. After graduating, Regi moved with Lofts to Seattle to relocate and release their self-titled EP.

Regi is currently working with Lofts, and Alice Merton on more endeavors. Additionally, he is working as a session musician and teaching music privately.