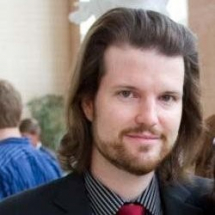 Peter has played Tuba since 1990 and Guitar since 1994, and has studied with players from the Houston Symphony, Boston Symphony, and Houston Grand Opera Orchestra. Since 1998, Peter has taught one-on-one lessons and master classes on Tuba, Euphonium, Baritone Horn, and Trombone. He has taught in multiple school districts, including Clear Creek ISD, Alvin ISD, and Friendswood ISD, and his students have included several Texas High School All-State musicians.

In 2008, Peter launched www.TubaPeter.com to showcase his arrangements for Low Brass Ensemble, which range all the way from the Renaissance to modern pop songs, along with everything in-between. TubaPeter.com’s YouTube channel has nearly 6,000 subscribers and over 2 million hits, thanks to Peter’s Low Brass arrangements of music from “Family Guy,” “The Legend of Zelda,” “Star Wars,” “The Simpsons,” and “Pirates of the Caribbean,” as well as songs by Daft Punk, Maroon 5, OutKast, J.S. Bach, and Scott Joplin. Since 2010, Cimarron Music Press (http://www.cimarronmusic.com/) has published four collections of Peter’s arrangements for Tuba, Trombone, French Horn, and Trumpet.

Peter currently plays Trombone for Refinery Coast, a Punk Rock / Ska Band from Houston, Texas (https://www.facebook.com/refinerycoastmusic), and can often be seen with the Bay Area Tubadours at Dickens on the Strand in Galveston (http://www.tubapeter.com/Bay_Area_Tubadours.html).


Music Teachers who come to your home or school!