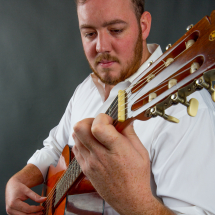 Peter was playing guitar from a very early age. His father played, and was teaching him songs as soon as he could fret the strings. Peter pursued music all through High School, joining the choir, becoming involved with theater productions and taking every music class he could. After graduation Peter decided to pursue music further and make guitar his concentration. Peter attended UNG as a Classical Guitar performance major. He also joined the school choir, touring several times across the US and Europe. Peter explored many different instruments during his time at University including Cello, Clarinet, Percussion, Piano, and Violin. Peter spent six years in the music department studying under some of the best musicians in North Georgia. He has performed in many different venues and settings, and taught students young and old. Music is Peters greatest passion and he truly enjoys spreading and sharing that passion with others.