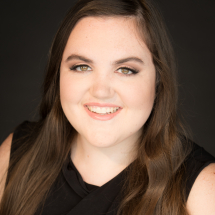 Nicole has been singing as long as she can remember. She started singing in church choir when she was five, and started taking private lessons when she was ten. Nicole earned her BM in voice performance from LSU and her MM in voice performance from Boston Conservatory at Berklee. She studied German Lieder at the American Institute of Musical Studies (AIMS) in Graz, Austria, and German opera at Berlin Opera Academy. Nicole also studied at Operaworks in California, which focused on a holistic approach to singing.

Nicole has toured with choirs in Texas, Los Angeles, Las Vegas, Washington DC, and Poland. In undergrad, she performed in multiple shows including Carmen, Così fan tutte, The Merry Widow, Sweeney Todd, and had the lead in The Mikado.

Nicole has worked for many years in children’s music, helping teach fundamentals to children as young as five. She has helped lead choirs for kindergarteners and first graders, and worked with five year olds at summer music camps. She also has many years of experience working with children ages 1-12 in a variety of settings. Nicole relishes the opportunity to share the joy of music with her students each week as she helps them develop their skills and find their voice.