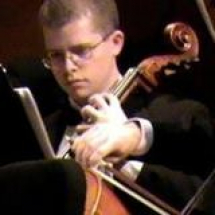 Nicholas Heaton began playing the Cello over a decade ago. Throughout his career, he has been an active member of Honors Orchestras, Youth Symphonies, Chamber ensembles, his University Symphony, and Opera Symphonies. Nicholas’s musical career has been mostly classical in nature with some contemporary and popular music ensembles in the mix. His teaching experience spans most of 5 years. In his teaching he emphasizes relaxing during playing to contribute to a better sound, more healthy body, and quicker progression.

Mr. Heaton has trained under the renowned cellist Martha Gerschefski, whose exploits are too numerous to count, for three years in college. He currently practices under Christopher Rex, the Principal cellist of the Atlanta Symphony Orchestra. Mr. Heaton is in his Senior year at Georgia State University in the heart of Atlanta.

Nicholas first encountered the Cello at the age of 9 when he visited a local middle school when their Orchestra put on a demonstration. He immediately ran away from his mother and started asking the cellist questions about it. Since then, he and his cello have been inseparable.