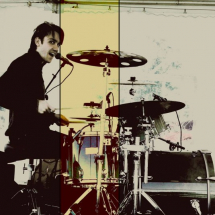 His journey into professional drumming started in 8th grade where he formed his first band with schoolmates.  After a few months, they booked their first show at The Strand Theatre in Marietta.  After that, Nathan's hunger for the stage became stronger and he continued playing in various bands while studying music in high school and college. He studied drums and percussion with a concentration in performance at The University of Georgia and Mercer University.

Inspired by The Dave Matthews Band, Nathan took time off from his studies to move to Charlottesville, VA to experience their music scene.  There, he met his future band mates Jason Pomar and Edgel Groves to later form the band Sun Domingo.  With that 4 year experience on the road, things came to full circle when Sun Domingo was invited to play for a private event held by Dave Matthew's Band Violinist, Boyd Tinsley. Nathan has had the privilege of sharing larger stages with Incubus, Edwin McCain, Marc Broussard, Sister Hazel, Marillion, and performing on Sixth Man's "Rock Boat".

Now he plays full-time as a free-lance drummer around Atlanta with various bands and solo artists and wants to bring his experience to you by Lessons In Your Home.