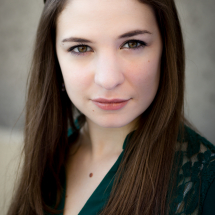 In March 2017, Naomi was awarded the grand prize at the Kristin Lewis Foundation Vocal Scholarship Competition. The award from this national competition included a trip to Vienna to study at the Wiener Staatsoper that will occur in 2018. Throughout her formal academic studies, Naomi was awarded titled scholarships. These include the Winifred and Maurice Hirsch Memorial Scholarship at the University of Houston and the Ellalou Dimmock Vocal Honors Award at Boston University, which recognizes outstanding achievement in vocal performance at the undergraduate level and includes a presentation of the winners in recital.

Naomi Brigell currently lives in Houston, TX, where she discovered her love and passion for teaching voice and piano lessons. She can be seen performing regularly with the Houston Saengerbund and at Emerson Unitarian Universalist Church. She has also appeared in onstage with Bach Society Houston, Operativo Houston, The Piping Rock Singers, and Houston Lutheran Chorale. Naomi holds a Master of Music degree from the University of Houston and a Bachelor of Music degree from Boston University.