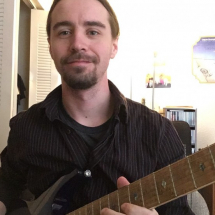 Mitch Pew is a guitarist based out of Duluth, GA. He is originally from Wooster, OH but has moved to attend the Atlanta Institute of Music and Media's guitar performance program. He began playing guitar at age 14 and has continued playing since. After playing for one year he began to write original songs and perform with his high school band. Mitch began playing rock and metal but throughout the years has delved into other genres such as blues, jazz, country and fusion.

Mitch has been hired to write and perform with Northeast Pipe Band based out of Cleveland, OH. He is currently working on finishing the guitar performance program at AIMM, his own solo album and playing in Atlanta progressive rock band, Not Otherwise Specified. He is very energetic about learning and teaching music.