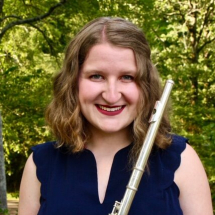 Ms. Miriam Copeland is a native of Maumelle, Arkansas and has been a musician for most of her life. From an early age she learned to play piano and developed a strong love and connection with the flute which she studies at the University of North Texas

During her time in high school she was honored to qualify as a participant of the All-State Concert Band, Symphonic Band, and Wind Symphony in her three respective years of eligibility. In addition to these achievements, Ms. Copeland consistently received superior ratings when competing at the regional and state levels of Solo and Ensemble. By the time of her graduation she had accumulated 14 superior regional medals, and 9 superior state medals. Ms. Copeland also performed for two years with the Arkansas Symphony Youth Orchestra where she worked with conductors Geoffrey Robson and Philip Mann. During her time with the ASYO Miriam had the honor to perform works such as Respighi's Pines of Rome, Ravel's Bolero, and Tchaikovksy's Romeo and Juliet. While in high school she was the two time recipient of the Woodwind Musicianship award and upon her graduation she received the Governor's award for Musical Excellence. In addition to these recognitions Ms. Copeland was chosen as a Full Captain at the Dixie Band Camp for 2018 and received the Wendell O' Evanson award for musicianship at the Henderson High School Band Camp when she attended in 2017.

Ms. Copeland is currently in her third year of studying for a Bachelor of Music in Flute Performance at the University of North Texas where she studies under the famed Mary Karen Clardy. During her time in college Ms. Copeland has performed in four different chamber groups, the Women's Chorus, University Band, Concert band, and Wind Orchestra where she collaborated with conductors Charlotte Botha, Nicholas Williams, and Brett Penshorn. While at UNT Miriam was selected to perform in the Flute! Masterclass, attended a masterclass taught by Jim Walker, and attended lectures given by Susan Milan and Alessandra Woods. In addition to her musical accolades, Ms. Copeland enjoys her time working as the Front of House manager of the Murchison Performing Arts Center on the UNT campus.