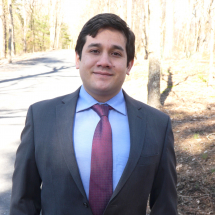 "Musical training is a more potent instrument than any other, because rhythm and harmony find their way into the inner places of the soul." - Plato

Born in Bogota, Colombia, but raised in Annapolis, MD, Miles grew up surrounded by music. His parents are avid music lovers, and always played music around the house. Whether it was blues, rock, classical or jazz, Miles heard it all before he even knew it. At the age of 6, he began taking classical piano lessons. Then in high school, he taught himself guitar, expanding his repertoire to blues and rock. Though he started learning guitar later in his youth, his piano training allowed him to pick the instrument very quickly. After only a couple years of playing the instrument, he applied to music school for guitar as his principal instrument.

Miles graduated from Berklee College of Music with a Bachelor's Degree in Professional Music, concentrating on ear training and Latin Jazz. During his time there, he had the chance to study under Mike Williams, Tomo Fujita, Steve Prosser, Jane Potter and Fernando Brandão. While studying there Miles played in many jazz and funk ensembles as well as fellow student pop bands that toured the area. While he studied jazz extensively, Miles can teach you a multitude of musical styles, as his vast interest in music has greatly influenced his playing. His own influences include Paul Gilbert, Johnny Guitar Watson, Kenny Burrell, Grant Green, and Herbie Hancock.

While in college, Miles began teaching guitar, as well as tutoring ear training and began loving teaching from there. Though he studied guitar, he has not forgotten his piano roots, and still encourages everyone to learn the instrument, regardless if it's the first or not. To this day, Miles teaches both guitar and piano, but can also teach bass and ukulele. He strives for each student to truly understand every aspect of music; rhythm, melody and harmony. While he uses common method books and essential repertoire for each instrument, he also feels that students should be able to set their own musical goals, whether it be the latest pop song, or music their parents enjoy. Miles remembers that when he found music enjoyable to listen to it was much more motivating to learn to play. He hopes to bring this kind of enjoyment of music to each of his students.

Fun Fact: While starting to learn guitar, Miles decided to also learn how to construct guitars and all of his music studies were done on his first one. Later, came more guitars, effect pedals, and eventually to today, servicing, designing and constructing tube amps for guitar. He also does guitar-related service for his students.