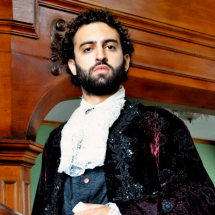 Education:
University of the Arts Caracas

Miguel Salas , a Venezuelan baritone born in Caracas in 1987, began his musical studies at the age of nine at "Maria Teresa Castillo" Cultural Center. While there, he placed first in the II Children's Voice Festival of Chacao (Caracas - Venezuela) and later became a member of the "Children's Show Choir of Sucre" for two years where he performed in several televised events.

Miguel then moved to the city of Maracay where he joined the music school "Federico Villena" (2000-2008) studying music theory, musical dictation, harmony, academic piano, classical guitar, music aesthetics, music history, counterpoint and classical singing with teachers Hermes Gomez and Lola Linares. While there, he performed as a soloist in various productions in the opera house of the city.

In 2006, he received a scholarship from the Government of Aragua state to study Italian and Opera in Florence, Italy. Following his studies, he worked with the National System of Youth Orchestras as a choir director and vocal coach. He joined Simon Bolivar Symphony Chorus for two years with which he participated in the America Cantata Festival in 2013 and the 2014 Salzburg Festival as well as numerous concerts in Caracas. In 2009 and 2012, he was invited by the Organization of American States (OAS) to work with youth at risk in the Caribbean islands as choir director and vocal coach.

Miguel has performed professionally as a baritone soloist in numerous operas and musicals. He has also worked as a pianist and arranger and continues to perform locally with the Central Florida Lyric Opera, Mad Cow Theater, and The Local Vocals ensemble.

University of the Arts Caracas