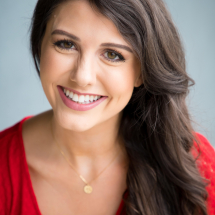 Meredith Howard, a soprano from Acworth, GA, earned her Master of Music degree (with a concentration in Voice Performance) at Georgia State University and her Bachelor of Music degree at Shorter University. She was awarded the Aileen and Chris Valianos Fellowship in Music and the Peter Harrow Vocal Scholarship at Georgia State, in addition to a graduate assistantship full scholarship. Miss Shorter University 2016, Howard won a talent award at Miss Georgia for performing "O mio babbino caro." She placed first in Shorter's William and Mary Knight scholarship competition, received the Most Outstanding Senior in Vocal Performance award, and was awarded the Rome Music Lover's Club Scholarship.

Meredith most recently performed the role of Sandy in the world premiere of "Don't You Know" at Georgia State. She also sang the role of Barbarina in "Le nozze di Figaro" at the Harrower Summer Opera Workshop. Her other major roles include Geraldine in "A Hand of Bridge", Patience in "Patience", Julie in "Show Boat", Romilda in "Serse, Mother in "Hansel and Gretel", and Nora in "Riders to the Sea." A graduate of the Cobb County Center for Excellence in Performing Arts, Meredith was also accepted into Governor's Honors Program for voice and participated in All-State Chorus throughout high school.

Being that she is both a private instructor and staff singer at Peachtree Road United Methodist, Meredith is passionate about both performing and teaching music. She deploys a versatile teaching style in which her students learn all aspects of singing, sight-reading, proper vocal technique, audition etiquette, and performance skills. She currently studies with Grammy-winning tenor Richard Clement, and is hopeful to get her Doctor of Musical Arts degree so that she can one day expand her teaching to the collegiate level.