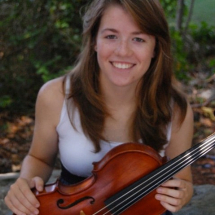 Melissa D'Albora, a Rhode Island Native, began playing viola at 14 years old under the direction of Carol Pellegrino. She later studied under John Sumerlin before going to the University of Connecticut. During her undergraduate years, she studied viola under Robert Meyer, Steven Larson, and Dr. Solomiya Ivakhiv.

During her sophomore year at the University of Connecticut, she began studying under Dr. Kenneth Fuchs for composition. Since then, she has composed works for many of her peers. She composes mostly for chamber ensembles. The chamber ensembles range from traditional, such as string quartets and brass quintets, to more unusual ones like a work for six violas. The majority of her works are highly influenced by fairytales and short stories. Her most recent compositions have been The Lottery for wind ensemble, The Traveling Companion for violin and piano, and Under The Willow Tree for string quartet.

Most recently, Melissa is working on her MM Composition at the Frost School of Music at the University of Miami. She is currently studying under the direction of Dr. Dorothy Hindman for composition and Chauncey Patterson for viola.

As a performer she is an advocate for music that is underperformed as well as music by female composers. For her recitals, she has performed works by Elliott Carter, Rebecca Clarke, Henri Casadesus/Handel, Robert Schumann, Vivian Fine, Felix Mendelssohn, W.A. Mozart, and Jennifer Higdon.