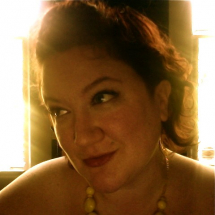 Meghan Quinn has been drawing forth melodies and movements from the piano since she was old enough to crawl onto the piano stool. The sounds of the piano would wash her brain with color and she would sit and play as long as she was allowed. Years later she would discover that she had Chromesthesia, or sound-to-color synesthesia. Middle C on the piano to her is a lovely goldenrod color and Eb is an indigo blue. By the age of fourteen, she had already composed a litany of songs both instrumental and lyrical exhibiting her own unique potential as a musician and songwriter. At the age of sixteen, Meghan began helping lead the worship band at her church and from there began her own musical journey as a professional songwriter under the name of Meghan Coffee and would release her first EP in 2005. She quickly found purchase in the southeastern music scene and won much critical acclaim. Meghan Coffee released two studio albums and subsequently went on to tour with such notable musicians as Jay Clifford of Jump! Little Children and Edwin McCain. In addition, Meghan Coffee toured on her own throughout the U.S and Canada. Since then, in 2012, Meghan released two more EPs and has recorded and performed two albums with the band Quiet Hounds.

Whether it be in piano, voice, guitar, or songwriting, Meghan derives great joy from teaching music and loves to nurture students to discover their unique learning experience in order to bring music to life in their hands. She is the proud mother to two amazing boys, and currently resides in the greater Atlanta area working towards a Masters in Social Work with a desire to fuse music and the arts into mental health advocation and education.