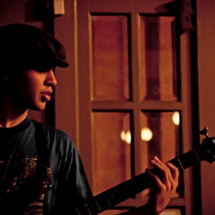 Originally from Chicago, Matthew Willhelm began playing music at 11 years old. His first foray into the musical world happened in sixth grade when he joined the Grady Middle School band. He participated in his high school's drum Line and begun playing Bass in their jazz ensemble. He has studied with Mary Carol Warwick and Anthony Sapp and is currently pursuing his Bachelors of Music at HCC.

Matt performs on guitar and bass weekly in various bands and groups in the Houston area as well as on tour. He has performed with Wasi Townsend, Song Byrd, Wiggins and Rizk, as well as numerous other local bands and jazz ensembles. Most recently he has been a member of the E. Nicole Band and the resident bass player for the Cha House Jazz Band.

Matt has been teaching independently in Houston since 2008 and has found his passion for teaching his students and opening their minds to music more rewarding than anything else.