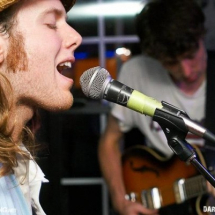 Born and bred in Decatur, Georgia , Matthew Pendrick never suspected as a child that music would become his truest passion and full time calling, an entry into a world of sincere friendships, life lessons, and personal fulfillment. Forced to take up the clarinet in middle school band, he slowly developed a talent for musical expression and a love of the group dynamic of being part of a large ensemble. In high school he moved over to the alto sax, exploring jazz, R and B, and more complex classical music. As a featured soloist in many settings, from a Ray Charles marching show to the lush arrangements of a full symphony, Matthew came to appreciate the broadened expressive capabilities allowed by the saxophone.

Around this time he was passed along a hand me down guitar and began to further explore the Blues and roots music that enthralled him for most of his waking hours. His baptism by fire came suddenly when he befriended a local Decatur street musician, notorious throughout the city, and began soaking up the vast songbook and varied technique that only decades on the bandstand can teach. Backing up his friend and mentor, Guitar Red, on various gigs throughout the city, Matthew met and befriended many other musicians and began forming his own groups. These experiences exposed him to many kinds of music and were important steps on his own musical journey.

Along the way Matthew has also studied with several renowned instructors including Esteban Anastasio and Oliver Wood (of the nationally acclaimed act the Wood Brothers) and performed in many of Atlanta’s top venues. He will receive his Bachelor’s from Georgia State University in the spring of 2012, where he has studied music technology and poetry, among other things. Matthew currently gigs around Atlanta most weekends on various projects including his own Blues and Roots Rock band, Midnight Revival, as well as backing up some of the cities finest young talent and performing solo when time allows. Passing on the knowledge he has been fortunate to learn has become a major part of his evolution as an artist. In teaching and writing music, Matthew finds a lasting satisfaction that transcends playing cool licks and learning scales, and a joy that fulfills like nothing else he has known.