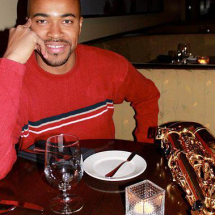 What started as a curious rummage through his father’s records of Earth Wind and Fire, Stevie Wonder, Anita Baker, Boney James, Kirk Whalum and Grover Washington, birthed the void of a sound that only Marquis Hare could fill. Introduced to music at the young age of five, Marquis digested the sounds of Jazz, Blues and R&B, until he discovered the one sound that wasn’t enough just to consume; he had to contribute to its legacy….the voice of the saxophone. Six years later from the discovery of his purpose, Marquis began his journey to master this beautiful instrument of love. From the first wind blown into an alto sax, to the continuing breath of brilliance heard through the soprano, Marquis has truly become the sound of necessity to all who hears. Born in Cleveland, OH, raised in Atlanta, GA, Marquis received his Associate of Arts degree in music with an emphasis in Choral Studies from Gordon College. In 2007, received his Bachelor of Arts in music from Schwob School of Music at Columbus State University and finally in 2010, received his Master of Music in Jazz Studies from The University of Tennessee, where he has had the pleasure to study with Donald Brown, Greg Tardy, Mark Boling, Keith Brown, Rusty Holloway, and Vance Thompson. He participated in a jam session his first year in Graduate School with Kirk Whalum. Currently, Marquis performs corporately as a soloist and with bands throughout Georgia. He privately teaches saxophone, piano, and flute. He also is the music director at Intown Academy. He has recorded with Donald Brown (internationally known jazz artist) and a neo-soul group called Aftah Party. He has performed with the Knoxville Jazz Orchestra and The Impressions.

Associate of Arts degree in music: Gordon College 2004 -Bachelor of Arts in music: Schwob School of Music at Columbus State University 2007 -Master of Music in Jazz Studies:The University of Tennessee 2010