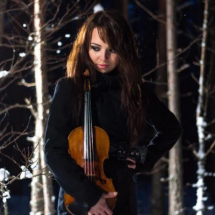 As a secondary instrument, Mari-Liis also studied piano throughout her childhood and musical education in Tallinn, Estonia and Vienna, Austria. Also, she expanded her horizons in the strings field by learning the viola (solo, chamber and orchestral music) and played e-violin in various groups and bands. Given her strong multi-instrumental background and extensive education in orchestral strings, she also teaches beginner cello.

Mari-Liis has successfully participated in several national and international competitions. She was a prize-winner at the 1st World Violin Competition in Trento/Italy, awarded diplomas at several ESTA Competitions for Estonian Young String Players, and was a winner of Danenberg Honors Recital in chamber music and the soloist category. Mari-Liis was also finalist in the 25th Flame Competition in Paris.

Mari-Liis is a scholarship recipient of the Vladimir Spivakov International Charity Foundation. In December 2007 her first CD „Bernsteinstraße" (live concert-performance with Estonian music) together with organist Ulla Krigul was released in Vienna.

As an educator, Mari-Liis finds great joy through her teaching and has a wealth of experience in working with students in a variety of age ranges and locations (throughout Europe and the USA). As a violinist, who has gone through and experienced a lot of different teaching styles and violin / music schools herself, Mari-Liis has the capacity to treat every single student with the utmost individuality--finding the best teaching techniques that bring out the best in every person. Her vibrant life as a musician started with Russian school for 9 years, continued with classical and refined German/Austrian school, and ended in the USA with Prof. Milan Vitek, which was an experience that added individuality, musical freedom, and risk taking to her unique playing style.

For Mari-Liis, the best part about being a teacher is the ability for her and students to learn a lot from each other through varied experiences, contexts, and phases in life. She firmly believes that every student she has taught throughout the years has made her the person and musician she is today!