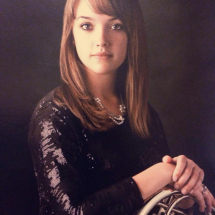 Mackenzie Newell is a French hornist and educator currently based in Atlanta, Georgia. She began her career in Boston where she performed with the Boston Symphony Orchestra, the Cape Cod Chamber Orchestra, and Andrea Bocelli in concert.

She holds a Bachelor of Music from Boston University and a Master of Music from the New England Conservatory of Music. Additionally, she spent a semester in London at the Royal College of Music. She also attended the Aspen Music Festival studying with Andrew Bain and members of the American Brass Quintet. During her undergraduate studies she performed in Carnegie Hall, the Concertgebouw, and all across Spain and Holland with the Boston Philharmonic Youth Orchestra.

Since moving to Georgia, Mackenzie has played with the Atlanta Opera, plays regularly with the Georgia Symphony Orchestra, and teaches horn players around the area from middle school to collegiate levels since her recent appointment at the University of North Georgia.