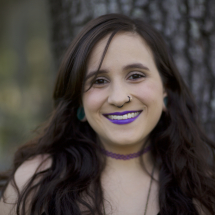 Finding a way to convey what one's heart is trying to say through music has been at the core of Lucia's musical journey. She received her Bachelor of Music from Florida State University under the tutelage of Eva Amsler. During her time at Florida State she played flute for the Amethyst Quintet, was Principal Flautist for the University Philharmonia Orchestra, and took part in many chamber works with other colleagues. She also attended New World School of the Arts and studied under Suzan DeGooyer in Miami, FL.

Lucia has been teaching privately since 2017 and was the interim music teacher at North Beach Elementary working with children from 2nd to 5th grade. Her goal is to give her students the gift of self-expression through music. She believes that everyone has the ability to tell their story and express their truth through music, and help themselves through difficult times.

A great passion for Lucia is music production and songwriting. Being able to play and read music is incredibly important, but there's something special about writing your own piece or song. Being able to create something purely your own, whether a piano solo or a folk song, taps into another part of self-expression that should be explored more. Not only does one tell a story but they also learn how music works on a deeper level. Learning theory is extremely important, but applying it is even more so. Her goal is for students to have fun, be able to create their own songs, and to create music freely. Lucia plays flute and synths for the progressive math rock band, Sunstrife. When she is not teaching or playing shows, she loves to produce indietronic music and beatbox on her flute.

Creating a space for creativity and empowerment through music is her life's mission.

4 Tips to Master Hand Independence on the Piano