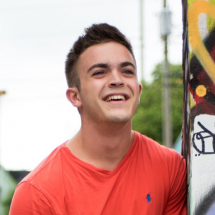 Liam O'Brien, A Pop/Rock artist that performs with a flare of soul, Liam loves to share his music with listeners and learners. Born in a house full of musicians, Liam began to sing at nearly the same time he began to speak. At the age of six, his mother pushed him to take classical piano lessons, and years later, discovered the incredible talent of Billy Joel which is when he took off with his contemporary performance career.

Liam continued to be influenced by multiple artists including Justin Timberlake, Stevie Wonder, Eric Hutchinson, Michael Buble, Jason Mraz, John Legend, and more. He started to create his own arrangements of these artists' songs, which soon translated to writing his own original music. At the age of fifteen, Liam performed his first original song at a bar that his dad sang at. After a positive response from the crowd, Liam continued to write and perform.

At the age of sixteen, Liam started teaching young children music lessons, working on drums, piano, and vocals with the kids. He also got a chance to expand his horizons as a music counselor at the town camp. Teaching these kids was a success and nothing but fun, but Liam knew he hadn't learned enough himself yet. So when he was seventeen, he made the decision to attend the Frost School of Music at The University of Miami to further his musical skills and to enjoy eighty degree weather year round. At school, he formed a band after being chosen to perform at the Frost School of Music's Songwriter's Showcase afterparty. After that first performance, he continued to perform out in Coral Gables, South Miami, Brickell, Miracle Mile, Downtown Miami, Miami Beach, Key West, Boca Raton, Hollywood and more. He also connected with producers on campus to record his first single and EP. Through the theory skills and multiple instruments Liam learned in high school and continued to strengthen in college, Liam started teaching college students who were struggling in class theory, ear training, and basic piano.

Nearly four years later, Liam is set to graduate from school and push his talents to the next level. His goals are to continue performing while staying involved in the digital marketing business, all while sharing his knowledge with students. After years of hard work, Liam enjoys sharing his talents and skills to students and does so with energy and enthusiasm that make his students enjoy learning music.