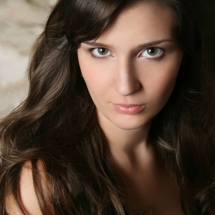 She received her Doctor of Musical Arts from the University of Georgia, and her Master of Music from the Cleveland Institute of Music, where she was praised for her "mastery of the demanding vocal lines" of Sister Constance in Poulenc's Dialogues of the Carmelites. She has found a special calling in the operas of Mozart, performing many of his heroines: the Countess (Le nozze di Figaro), Donna Anna (Don Giovanni), Konstanze (Die Entführung aus dem Serail), Madame Herz (Der Schauspieldirektor), and Fiordiligi (Così fan tutte). Dr. Cotney has also recently performed the title role in The Merry Widow and Mimì in La bohème. Equally at home on the concert stage, Dr. Cotney has served as a soloist in works such as Handel's Messiah, Schubert's Mass in G, Haydn's Creation, and Vivaldi's Gloria. She recently was featured as the Matriarch in the US premiere of Paul Mealor's dramatic cantata The Farthest Shore with the Atlanta Boy Choir.

Dr. Cotney has been distinguished as the recipient of the Irvin Bushman Memorial Prize in Singing, was a 2018 winner of the University of Georgia Concerto Competition, and has been honored to be a semi-finalist in the Meistersinger Competition of the American Institute of Musical Studies in Graz and a semi-finalist in the Orpheus Competition. She was a founding member of the Great Lakes Light Opera Company, starring in outreach productions of Douglas Moore's Gallantry and Mozart's The Impresario. Their mission was to bring opera to unexpected and underserved communities in metropolitan Cleveland, including schools, juvenile centers, retirement communities, restaurants, and bars.

Dr. Cotney has been teaching private voice, piano, and theory lessons for roughly ten years now for all ages, styles, and levels of students. Her students have excelled in performances and competitions, earning top ratings at festivals and enjoying successes in recital and in stage productions, and have been accepted to prestigious performing arts programs at the high school and collegiate level. In addition to teaching privately, she is on the voice faculty at Georgia College and State University in Milledgeville, GA, and is affiliated with the National Federation of Music Clubs and the National Association of Teachers of Singing. Dr. Cotney still maintains an active performance schedule, but she finds joy in balancing her performances with teaching in the hope of inspiring others to enrich their lives through music.