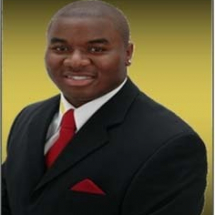 Larry J. Pinkston-Marshall, Jr. is a native of Montgomery, Alabama by way of Dayton, Ohio. He is an alumnus of B.T.W. Magnet High School in Montgomery, Alabama where he was a triple major in piano, theatre, and aviation, advanced placement student, and also graduated as the Upward Bound Valedictorian of Alabama State University.

Mr. Pinkston-Marshall began his musical studies as a very young child and continued them throughout grammar school, middle school, high school, and college. He has participated in several choral ensembles including the Morehouse College Glee Club, his most prominent, where he sang first tenor (second choir) and served as accompanist. He is a professional musician specializing in instruments: piano, organ and voice; and has also served director of music for various churches.

Mr. Pinkston-Marshall holds a B.A. Degree from Morehouse College, Certificate of License in Ministry from the National Baptist Association and Convention, and has several years of academic and professional music experience including working with the Atlanta Symphony Orchestra and Chorus, performances at Avery Fisher Hall, Lincoln Center, performances at Constitution Hall in Washington, D.C. as well as tenure in private and public education of music.