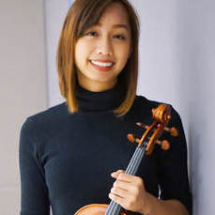 Larissa Mapua is a Filipino-American violin and viola teacher dedicated to sharing her passion for music. Selected by the John F. Kennedy Center for Performing Arts, she performed Debussy's String Quartet, Op.10 at the U.S. Capitol for members of the 114th U.S. Congress. She was invited to perform for Fidel V. Ramos, the 12th President of the Philippines, selections from J.S. Bach's Cello Suites, in 2012. She has performed at the Kennedy Center's Millenium Stage, Atlanta Symphony Hall, and on live television for Georgia Public Broadcasting. As an orchestral musician, Larissa held principal positions at the Brevard Music Center and DePaul University Chamber Orchestra. She can be heard with the Bowling Green Philharmonia on volumes of The Voice of the Composer: New Music from Bowling Green ?on Albany Records. Furthermore, she has performed for the Owensboro Symphony Orchestra and Columbus Indiana Philharmonic. Larissa has worked with conductors Robert Spano, Donald Runnicles, Carl St. Clair, Mei-Ann Chen, Gilbert Varga, Jung-Ho Pak, and Keith Lockhart.

Her solo engagements include Hindemith's Trauermusik with Michael Alexander conducting? at Kennesaw State University in 2010. As a chamber musician, she has performed at the National Music Festival, Brevard Music Center, Green Mountain Chamber Music Festival, and Madeline Island Chamber Music, and has worked with members of the Ariel Quartet, the Chiara String Quartet, and the Arianna Quartet. Larissa has played in master classes for a number of musicians, including Lembi Veskimets, Peter Slowik, Erika Eckert, Phillip Ying, and Sheila Browne. The National Federation of Music Clubs recognized her achievements with the Rose Thomas Smith Award. Her additional honors include awards by the Asian/Pacific American Council of Georgia, Galing Foundation, Inc, and Filipino-American Association of Greater Atlanta. In 2016, she received her Bachelor of Music degree in performance at DePaul University, where she studied with the late Rami Solomonow and Doyle Armbrust. Additionally, she studied with Matthew Daline and Allyson Fleck. She graduated with her Master of Music degree in performance at Indiana University Jacobs School of Music in 2018, from the studio of Edward Gazouleas.

Larissa has taught over sixty music students over the course of seven years as a private lessons instructor, violin and viola sectional coach, quartet coach, and violin group class instructor. She has assisted orchestra teachers within the Cobb County School District System. Lessons are designed to develop the musical potential that every student has by guiding students to produce their most beautiful sound, feel a natural comfort with their instrument, and play music they enjoy. Her pedagogy teachers include Dr. Olga Kaler, Dr. Carla Trynchuk, Dr. Clifford Colnot, Dr. Frank Diaz, and Mimi Zweig, director of the internationally renowned String Academy at the Jacobs School of Music.