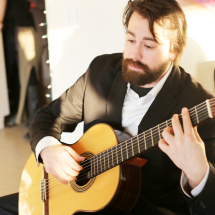 Kyle Summers is a Seattle-based Classical Guitarist and Composer who performs everything from Baroque and Classical music to the famous pieces of the Romantic Spanish and Latin American Composers, as well as Contemporary Music, Jazz Standards, and his own classically influenced compositions.

Having played guitar for two decades, he has studied with some of the best classical guitarists in the world. A long-time student of the University of Washington's Classical Guitar Director Michael Partington and former student of Cornish's Professor of Composition Tom Baker, he has also performed in Master Classes for internationally renowned virtuosos Xuefei Yang, Roland Dyens and David Russell.

He is also an accomplished guitar instructor, having taught students of all ages and styles for many years.