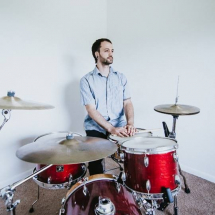 Kyle Edward Haneski is a regular gigging drummer currently residing in Orlando, FL. He is a Music Performance Major at Valencia College, and multi-instrumentalist (Guitar, Piano). He has been playing drum set for thirteen years. Born 1991 in Coral Springs, FL, Kyle's fascination with music began early on, with two Disc Jockeys for parents. In a house that was constantly filled with the sounds of music, it was only a matter of time until he would pick up an instrument.

Upon entering Middle School and seeing the drumline practicing in the fields, he was inspired to give it a shot. Drumline lead him towards trying drum set, and it was meant to be. He became engrossed in learning the rhythms and patterns, dissecting songs by ear, and making the music his own. He took private lessons for a year and remained self-taught until college, where he developed an appreciation for Jazz drumming.

He has played in multiple local acts of different genres and styles through the years, and currently plays for four Orlando-based original acts. With an extreme appreciation of Hard Rock and aggressive playing, but the understanding of the dynamics necessary for Jazz, Kyle is an eclectic player focused on mastering the instrument. He picked up guitar five years ago to better understand music, and learned piano during his schooling as a secondary instrument.

Kyle believes in learning what you listen to, and supplements lessons with basics of theory knowledge and technique drills to improve form and instill stronger concepts of music. He has taught privately for three years to a wide range of age groups.