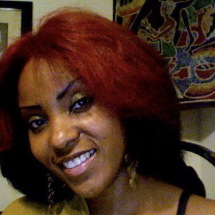 Krystal Johnson was born and raised in Cleveland, Ohio. She began singing and playing trumpet at the age of 11 where she soon discovered her love of music. She participated in state-wide competitions with her high school Wind Ensemble, Jazz Band, and Vocal Jazz Ensemble. All three groups continuously placed high in competitions. Senior year Krystal auditioned and was hand-picked out of thousands of auditions to be a part of the 2002 Grammy Choir. She traveled to Los Angeles to perform with many jazz greats such as Kurt Elling, Kirk Whalem, Dave Koz, and many others as well as attended the Grammy Ceremony.

After high school she attended community college where she received a scholarship into the jazz studies program. It was there that she learned to play the piano and honed in on her vocal and trumpet abilities. She participated in the Jazz Festival three years consecutively performing with the likes of Wynton Marsalis, The New York Voices, Diana Krall, and many others.

After graduating from Berklee, Krystal relocated to Atlanta, GA where she has lived Since 2010. She was offered a position as a singer and trumpet player for the Grammy Award Winning group Train on their world tour in 2012, but decided to travel to Africa for three months performing. In 2016 Krystal was hired by Beyoncé to play in the Superbowl halftime show with her along with Bruno Mars and Coldplay. Currently, Krystal performs with her band, song-writes, and produces. She enjoys teaching people of all ages. She has a natural niche for teaching and hopes to instill the love of music that she found very early on in her life.