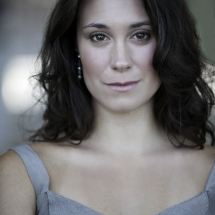 This Atlanta native is delighted to continue making her mark as a young artist in American opera. With a history in musical theater, jazz and folk music, classically trained singer, Kristin Vienneau, dove into opera studies in 2008 and is quickly evolving into a competitive lyric mezzo.

Ms. Vienneau made her professional operatic debut in January 2012 as Prince Orlofsky in Opera Memphis' Die Fledermaus under the baton of Maestro Steven Osgood and stage direction of General Director Ned Canty. While under contract with Opera Memphis as an Artist-in-Residence, Ms. Vienneau also performed as Peaseblossom/Fairy Soloist in the world premiere of A Midsummer Night's Dream: Opera A Capella by Michael Ching with Maestro Curt Tucker of Opera Saratoga, Ernesto in The Billy Goats Gruff (school tour), Pamina/Third Lady in an abridged version of Mozart's The Magic Flute (school tour), countless outreach concerts and educational programs (i.e. Opera 101 by Ned Canty) for Rotary Clubs, churches, local businesses and arts festivals, and even performed on Memphis' local NPR station, WKNO for the A Midsummer Night's Dream and Die Fledermaus previews.

In addition to her work with Opera Memphis, Ms. Vienneau was an Artist Diploma in Opera candidate at the University of Memphis. There, she studied voice with Dr. Pamela Gaston, acting with Copeland Woodruff, and coached with Mark Ensley. She had the pleasure of singing the Alto solos in Mahler's Symphony No. 2 under the direction of Maestro Pu-Qi Jiang and the University of Memphis Symphony Orchestra and Chorus. She completed the roles of Elizabeth Proctor (The Crucible) and Elmire (Tartuffe) with the Opera Department and performed in scenes from Verdi's Don Carlo (part of the acting class), Kamran Ince's The Judgement of Midas (to be premiered at Florentine Opera next season), and Floyd's Wuthering Heights. She earned her Artist Diploma in May 2012.

While at Georgia State, Ms. Vienneau studied voice with Kathryn Hartgrove and completed the roles of Carmen in Carmen and The Old Prioress in Dialogues of the Carmelites. In the summer of 2009, she attended La Musica Lirica, an American opera program in Novafeltria, Italy. There, she performed the role of Dame Quickly in Verdi's Falstaff under the direction of Maestro Joseph Rescigno, coached with Ubaldo Fabbri, studied voice with Julia Faulkner and took Italian language classes with native Italians.

In addition to opera, Ms. Vienneau is a passionate and avid recitalist. Her degree recitals at GSU and UofM provided her many opportunities to perform baroque chamber music, 20th century American/British music (including Bolcom, Britten and Heggie), Mahler's Songs for a Wayfarer and Ruckert Lieder, Spanish songs and Handel arias. She thoroughly enjoys the recital art form and looks forward to more opportunities in such an intimate arena. She hopes that these musical experiences can help prepare her for concerto/oratorio work with symphony orchestras.

Looking ahead in 2013, Ms. Vienneau will return to Opera Memphis to perform the role of Mother/Allison in This is the Rill Speaking as part of their chamber opera festival.