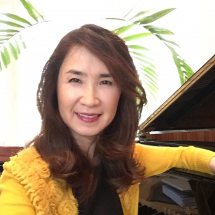 Katherine Yoon, born in South Korea, started piano when she was 6 years old. Later on at the age of 10, she also began practicing on the violin. As a young child, she attended a missionary school and was an accompanist for many of the school's choirs where she performed at military bases, churches, broadcasting stations, and other schools. It was during this time that she found just how great an influence music can have over our lives.

Katherine later went on to attend the Chung Book Art Festival and won four times, earning herself a four year scholarship that she would later use for attending YonSei University in Seoul, South Korea. It was there that she earned a Major in Piano Performance and performed as a soloist, accompanist, as well as working with others as a piano teacher.

After moving to the USA and settling down in Orlando, Florida, she continued her studies attending a Master of Arts in Teaching class at Rollins College with Dr. Gloria Cook. She later went on to become the pianist at Orlando Korean United Methodist Church in Winter Park and continues to teach classes to students of all levels and ages