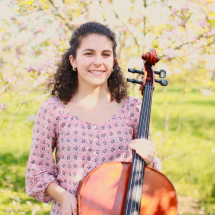 Education:
The University of Maryland

Katie McCarthy hails from Annapolis, MD. Based in the Washington, D.C. Metropolitan area, she holds a Bachelor of Music in Cello Performance from The University of Maryland. She is currently pursuing her Master of Music in Cello Performance, also at UMD, under the tutelage of Dr. Eric Kutz. She has performed with the University of Maryland Symphony Orchestra since her first year of undergraduate study, in which she occasionally holds a principal position. She regularly performs with chamber groups that are selected to play in honors recitals at the University of Maryland. Passionate and excited about new music, she also performs new works and premiers with the student-run contemporary music ensemble, TEMPO.

Ms. McCarthy has had music in her life since she was born. Her mother, a violinist, and her father, a percussionist, taught her the important role of music in life from the very beginning. She began her musical studies at age 5 with the piano, and soon transitioned to studying cello. After deciding to enter into a career of musical performance, Ms. McCarthy soon realized her love for teaching. The cycle of learning more about one's playing and learning how to teach others to play is inherently linked, as she found out.

Ms. McCarthy has performed in various summer festival orchestras. At the Interlochen Summer Arts Festival, she played in the World Youth Symphony Orchestra and the Interlochen Philharmonic, where she held a principal position. She has also played in the Brevard Music Center Orchestra side-by-side with the esteemed faculty members. In the summer of 2017, she attended the highly selective National Symphony Orchestra Summer Music Institute at the Kennedy Center in Washington, D.C., giving performances on the Millennium Stage and in the Symphony Hall. Most recently, Ms. McCarthy was selected to participate in the National Orchestral Institute and Festival, in which she performed in the NOI Philharmonic, a string quartet, a "conductor-less" orchestra, and a re-boot of the fully staged, symphonic, theatrical performance of Igor Stravinsky's "Petrushka" as imagined by James Ross.

Her past teachers have included Daniel Shomper, Felix Wang, of Vanderbilt University, and Rachel Young of the National Symphony Orchestra. She has worked closely in chamber music coachings with musicians such as Irina Muresanu, Benjamin Sung, James Stern, and the Shanghai Quartet.
McCarthy has also participated in masterclasses with prestigious musicians such as the Shanghai Quartet, Andrew Shulman, Hai-Ye Ni, the current principal cellist of the Philadelphia Orchestra, and Astrid Schween, the cellist of the Juilliard Quartet.

Ms. McCarthy firmly believes in catering her teaching style to the individual needs of each individual student and their goals. She focuses on building a strong technical foundation on which the student can progress and grow in the healthiest way possible. In additional to technical studies and building the student's repertoire, Ms. McCarthy incorporates music theory lessons and chamber music skills into lessons. Most importantly, she helps her students build and foster a strong relationship with music, both in playing and appreciating, so that they may carry the important lessons that music making teaches us for the rest of their lives.

The University of Maryland