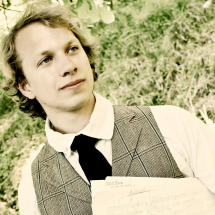 Justin Ralls, composer, conductor, educator and writer, was born in Seattle, WA and is inspired by the beauty of the natural world and elemental forms of creativity. Ralls' education includes a Bachelors of Music from The Boston Conservatory and a Masters in Music Composition from San Francisco Conservatory where he studied with Dalit Warshaw, Andy Vores, Jan Swafford, Dan Becker and David Conte. Ralls' has studied jazz/latin/rock drums with Charlie Doggett and Mel Brown and studied jazz, classical piano and improvisation with Stephen Holleran and Pierre Hurel.

Justin enjoys teaching students of all ages and abilities, employing diverse techniques and repertoire to inspire and educate. He has taught privately and at the college level at the San Francisco Conservatory of Music and University of Oregon.

Ralls was the regional winner of Third Angle Ensemble's inaugural 2012 New Ideas in Music Competition, conducting his winning work, 'Anthrophony', on two of the groups New Ideas in Music Concerts. In July, 2012 he participated in the inaugural Composing in the Wilderness workshop in Denali National Park, composing a piece while in the Denali wilderness for the Fairbanks Summer Arts Festival. 'Tree Ride', a piece for large orchestra inspired by conservationist John Muir, won the 2013 James Highsmith Composition Award. Tree Ride received Special Distinction in the 2014 ASCAP Rudolf Nissim Prize and was featured on the 2014 Fairbanks Summer Arts Festival in Fairbanks, Alaska conducted by Robert Franz. 'Tree Ride' was also featured on Albany Symphony's 2015 Composer-to-Center-Stage as well as their 2017 American Music Festival. In Sept. 2017 Opera Theater Oregon produced the world premiere of Ralls' chamber opera, 'Two Yosemites', setting the 1903 meeting of John Muir and Theodore Roosevelt - "Ralls took this thematic coloring to the next level, in the finest operatic tradition," (Oregon Arts Watch). He is currently pursuing his Ph.D. at the University of Oregon studying with Robert Kyr and David Crumb. Ralls enjoys the outdoors, rock climbing, backpacking, and reading the works of John Muir and Joseph Campbell. He lives in Seattle with his fiance, Anne, and their cat, Zoli.