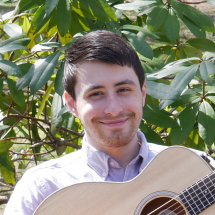 Justin Price is a Northern Virginian guitar player/instructor. He has had a passion for music above all things for as long as he can remember, finding himself enthralled by Black Sabbath and '90s hard rock in early adolescence, and requesting a KISS theme for his 5th birthday party (He had a KISS cake and got all four KISS "action figures").

At age 10, Justin took drum lessons briefly before moving on to the electric guitar. He took a lesson or two before breaking a string and putting the instrument away for a while, taking it out only to noodle from time to time. At age 13, he started to take things a little more seriously, picking up his guitar and teaching himself to play the intro of a System of a Down song using a toothpick as his guitar pick (or maybe a coin, or the tab of a soda can, can't remember. He used all of these at some point).

Justin continued his study with an emphasis on ear training and replication, until joining the West Springfield High School Guitar Program, where he studied under Keith Owens. WSHS Guitar allowed him the opportunity to perform with the Classical Guitar Ensemble and the Jazz Guitar Combo, and through his performances and involvement with the program Justin received such awards and recognition as "Outstanding Jazz Soloist", "All-Star Performer", and "Senior Guitarist".

Since graduating, Justin has continued to perform and record regularly with many bands and artists and focus on music education. His goal as an instructor is to share with his students the same feelings of excitement and positivity that music has always given him. He also aims to highlight the importance of independent study and exploration of musical instruments to develop a unique voice and perspective, in addition to topics like music theory and technique.