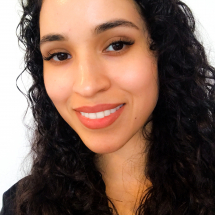 Joyceline Soto began her musical journey at the age of eight when she auditioned to join a children’s choir. By the time she was in high school she was performing and competing with her school’s top choir group which performed at Disney’s Candlelight Processional and Carnegie Hall. She was also a vocalist for her school’s jazz band. Ms. Soto believes that with the right amount of dedication and passion everyone is capable of becoming an amazing musician, regardless of age or skill.

Joyceline has studied various musical styles over the years such as classical, jazz, popular and contemporary styles as well as extended vocal techniques. Joyceline studied at Florida International University, where she focused on; music theory, vocal jazz, music technology, music composition and music business. Throughout her studies she has performed in numerous ensembles and on various instruments such as ukelele, piano, guitar, and synthesizer.

Ms. Soto enjoys working with both children and adults. Over the past three years she has lead an elementary school choir and music ensemble through “Achieve Miami”. Besides teaching music Joyceline enjoys painting, working with animals and curling up with a good book.