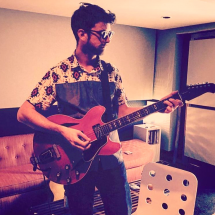 Joshua Hammond has been a passionate musician for more than 20 years. He primarily teaches Guitar and Bass. He started playing guitar at the age of 9 and is a multi-instrumentalist who took percussion in middle school. He specializes in jazz, blues, and rock guitar lessons as well as teaching scales, technique, and theory to play music of all types.

He has been a part of several studio albums over the years and played hundreds of shows, concerts, and paid gigs. He currently plays guitar in a band called "Galaxy Parade" as well as an Indie Rock band called "Londale." He is also proficient in Digital Audio Workstations and loves recording his band Galaxy Parade in his home studio and releasing their music professionally.