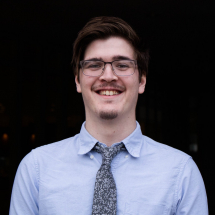 Tenor, guitarist, pianist, and composer Joshua Fisher has dedicated his life to the pursuit of musical expression. By delving into each new facet of his musicianship, Joshua was able to slowly but surely develop his own musical language.

Starting on guitar gave Josh an early appreciation for working with the physical nature of instruments, as well as an appreciation for keeping the rhythm going, and consistent practice. Joining choir jumpstarted his vocal path, and showed him the true value of a group musical experience. At James Madison University, Joshua developed his vocal skills as a voice major, becoming a classically trained tenor who performed regularly at churches, concert halls, retirement homes, and other venues. He performed solo, as well as in ensembles such as the Madison Singers, Camerati (a student led classical male a cappella group), and the Madison Project (a student led contemporary male a cappella group), which he directed for 2 years. In his collegiate studies, Joshua also learned piano, which only fed his love for music theory. He would constantly be in practice rooms trying new concepts or developing ideas. This creative drive eventually led Joshua to become a composer and songwriter, and he ended up graduating with a degree in music composition.

Joshua is a commissioned composer who writes music for the concert hall. Choir is his favorite ensemble. He was selected as a winner of JMU's first annual choral composition competition for his piece "The Rainy Day", a setting of a Henry Wadsworth Longfellow poem. He also writes songs for just him and his guitar. Joshua's goal in teaching lessons is not just to get a student to a certain level of proficiency at an instrument, but to get them to fall in love with music, and to understand it through whatever instrument they choose.