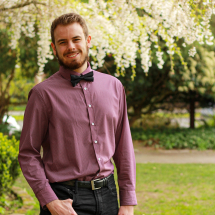 Joshua Gere is a pianist and vocalist (tenor/baritone) from Redmond, Washington. He recently graduated from Seattle Pacific University with a BS in Biochemistry and Minor in Music. Josh was heavily involved in SPU's music department and performed regularly in their Piano Practicum's on Thursday mornings during the school year. He was also a member of SPU's Concert Choir and performed regularly with them throughout the year. During his freshman year, Josh was a member of SPU's piano ensemble--a group of 4 pianists who perform duets, 3-hand piano, and 4-hand piano (2 piano) pieces. Josh will continue to be involved with SPU music as an alumni, having already made plans to work with accompanying Concert Choir as well as the Theater Department.

When Josh was around the age of 7, his parents thought it would be a good idea to get him introduced to piano lessons. After only a couple sessions, both his teacher and parents observed that Josh had a very unique talent--he was able to sight read almost any music put in front of him, even though he still had a lot to learn. As the years progressed, Josh was primarily taught the piano through means of sight reading pop, contemporary, and jazz music, most of which a classical teacher would not regularly cycle through. This method of learning continued until his Junior year in high school when Josh switched piano teachers. However, his new teacher realized one very important thing about Josh--he hadn't learned any music theory. This was something all of his classmates who played piano were familiar with, and he would soon realize that his colleagues in college had known how to play scales, identify chords, and name intervals for most of their life. Luckily, Josh caught on to the idea of theory very rapidly; it became not only a part of his education, but an integral part of his life.

Throughout college, Josh grew a very deep understanding of how much of an impact music has on the world, and this has inspired him to strive for great things in the pursuit of music. He hopes that--through his piano instruction--he can also ignite the same passion and desire he experienced at the end of high school, making him realize that he can accomplish many great things through harnessing the power of music. Josh has been playing piano for nearly two decades, and one of the most important things he learned--something he wishes to use in his lessons--is that loving music should come naturally, and that pursuing music should not merely be thought of as education, but also as a way of self-expression, stress relief, and joy.

Alongside piano, Josh is very passionate about the sciences and hopes to use his recently obtained BS Biochemistry degree to pursue research opportunities prior to applying for medical school. Outside of academics, Josh loves to go on hikes, play basketball, soccer, and spend afternoons with his friends and family. He has also been a DJ and music producer for the past 8 years and is currently involved in several unique projects, including helping a friend compose an original musical as well as producing a solo EP.