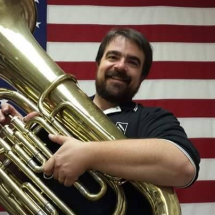 Joe Walsh is a happy to have grown up in Colorado and has been active tubist and music educator throughout the Denver area and Rocky Mountain region for many years.

Joe received his Bachelors degree in 2005, and Masters degree in 2007 in tuba performance from the Lamont School of Music at the University of Denver. While at DU, he studied with Kathy Brantigan, founder of the Denver Brass and Warren Deck, retired tubist of the New York Philharmonic. Joe played in nearly all the ensembles at DU including, Lamont Symphony Orchestra, Lamont Wind Ensemble, Lamont Jazz Orchestra on trombone, and Brass Quintets and Tuba Quartets.

Since graduating Joe has maintained an active playing career throughout Colorado. He has held the position of Principal Tubist with the San Juan Symphony, Longmont Symphony, and Denver Philharmonic. He has also played with the Cheyenne Symphony, Littleton Symphony, and Rocky Mountain Brass Works. Currently Joe is BBb tubist with the award-winning Pikes Peak Brass Band in Colorado Springs, and tubist in the Tivoli Club Brass Band.

Joe has had a busy career as a music educator throughout the Denver Metro area. Joe has been the director of the Pioneer Pep Band at the University of Denver since 2009. He is also Music teacher at Ascent Classical Academy in Douglas County where he teaches general music and band. Joe has served on staff at many High School band programs as a brass instructor including Legacy HS, Englewood HS, Castle View HS, Arapahoe HS, and Conifer HS. Joe has also taught private lessons for nearly 20 years, many of his students have performed in All State Honor Ensembles and gone on to earn music scholarships.

Joe enjoys most helping students find the joy and wonder in performing music.