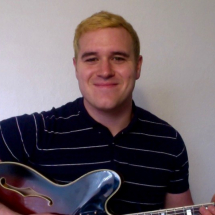 "Joe Oakes started playing drums and studying music theory and piano at the age of 4 with his grandfather, an accomplished Army and High School band director and trumpeter. He began learning to play guitar at age 8 after receiving his great-uncle's old classical guitar for his birthday and was hooked. He studied with guitarist Buddy Cavaleri for three years, who gradually taught him how to teach himself, which is also a goal Joe has for all of his students. Eventually, Joe began playing in local bands in his hometown of Warwick, RI, and also served as guitarist for the children's choir at St. Peter's Catholic Church in Warwick for four years.

After high school, Joe enlisted in the US Navy, where he spent four years working as a mechanic. He was stationed in Bremerton, WA. After leaving the Navy, he decided to change paths and return to pursuing a career in music. He moved to Seattle and began attending Cornish College of the Arts where he's currently studying jazz guitar performance. In his time there he's had the honor of playing and studying with Chris Spencer, Jovino Santos Neto, Chuck Deardorf, Dawn Clement, Margie Pos, Tim Carey, and many other accomplished jazz musicians in the Seattle area. He's a patient and understanding instructor who emphasizes helping his students find their own natural talents, giving them the tools and confidence to teach themselves, and most of all making sure they're having fun with music."