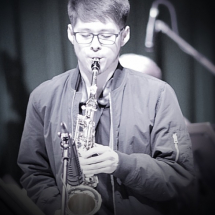 Saxophonist, educator, and composer Jorge Galvan is an upcoming young musician from Houston, Texas. He studied Jazz at the University of North Texas, in Denton, under renowned professors, such as Brad Leali, Jose Aponte, Mike Steinel, Chris McGuire, Phillip Dizack, and Dave Meder to name a few.
He first learned to play in church as a child. Then in high school, joined Diaz Music Institute, a non profit organization based in Houston for kids of all ages to learn to play Latin Jazz. He played with the organization’s premiere Latin Jazz ensemble “Caliente” under the direction of Grammy-nominated director, Jose Antonio Diaz. In addition to teaching, Jorge is currently playing with the HCC Big Band under the direction of Woody Witt.