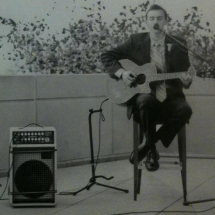 Jordan has been playing music in one form or another since before he can remember. After playing various instruments as a child, including cello, trumpet, violin and piano, he began playing the guitar at the age of 11. Shortly after beginning to learn guitar, he developed a chronic illness which went undiagnosed for almost 5 years. During this time, he was unable to attend school regularly and would focus his limited energy on learning to play the guitar. This gave him a purpose and motivation to persevere during such a difficult period.

At age 16 when his condition was treated and his health began to improve, Jordan decided he wanted to try performing. He played guitar and sang for tips on the Ocean City boardwalk every day during a family vacation and was hooked. After that he began playing 5 days a week at a chain of sandwich restaurants, and later began playing private events, hotels, restaurants, breweries and cruise ships.

Now, he continues to perform and also teaches guitar. He wants to provide people of all ages with the magic of music as well as the uplifting impact it can have on their life.