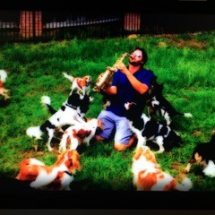 Jordan Shalhoup is a professional touring musician and teacher
from Atlanta, GA. He has a music degree from GA State
University in the heart of downtown Atlanta. He grew up playing
saxophone, guitar, clarinet, all saxes, flutes, piano, anything he
could get his hands on. He was influenced by many different
artists as his parents enjoyed listening to a wide variety of music
including the Beatles, Earth Wind and Fire, Carley Simon, Stevie
Wonder, David Bowie, Cheap Trick, MTV, etc. As a teenager,
Jordan was finally introduced to Sonny Rollins! That was the
catalyst that inspired him to commit his life's work to the love of
music and the saxophone!

As a member of the jazz community and a member of the
R&B/pop world, Jordan Shalhoup performed with an eclectic
range of musicians over the span of his career in Atlanta.
Including THE Zac Brown Band, Coy Bowles and the Fellowship,
Kenny Garret, Slide Hampton, Nicholas Payton, David Sanchez,
Kevin Bales, Sam Skelton, Dr Gordon Vernick, Yacht Rock,
Electric Avenue, many more! After 28 years in Atlanta he and his
family have relocated to the Denver area and are very excited
about performing, teaching, and living in the mountains.

Not only is Jordan a strong Saxophone teacher but he's also a
committed piano, guitar, clarinet, composition, theory teacher!
He's is currently performing with several jazz bands, rock bands,
electronic, touring/festival bands (Electric Avenue and Yacht
Rock), not to mention his own original projects. Look for his
performances in the Denver area!