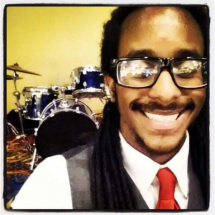 Jordan Manley began playing drums in church at age 10. When he was12 his parents bought him his first drum set, and he immediately dove headfirst into the life of a working musician.

Jordan’s early years were spent playing in churches and traveling with his uncle’s gospel group. In high school he played in the marching band and in the years after, he joined the Columbus-based rock-hip-hop band Stereomonster. The band has recorded three full length albums and has toured the southeast extensively including an appearance at SXSW. They’ve also preformed at several Atlanta venues including Smith’s Olde Bar and the Masquerade.

Between stints on the road, Jordan taught drum lessons at the Columbus School of Music. He was a three-time senior project mentor and also helped instruct the School of Rock–a program that mentored student bands in performance and self-promotion.

As a sideman, Jordan is a lighthearted guy who listens exceptionally well and blends with any genre of music. He’s influenced by drummers like dave Grohl and John Blackwell as well as other musicians like Miles Davis, Jimi Hendrix and several hip hop producers like Timbaland and Pharrell Williams.

As a teacher, he’s a fun-loving music historian with a wealth of knowledge and on-the-gig experience to share. He specializes in teaching rudiments, reading and various styles of playing drum set including rock, hip hop, country, and jazz. Parents and students appreciate his patience and his willingness to meet their personal goals.