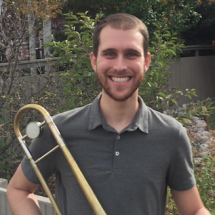 Jonathan Zimny is a trombonist, vocalist, and educator from Sacramento, California. He was fascinated by music from an early age and raised in a musical household by two band directors. In 2010, he moved to Colorado to attend the University of Northern Colorado where he received his BM in Jazz Studies. While there, Zimny studied with Dr. Nat Wickham and performed with UNC Jazz Lab Band 1 under the direction of Dana Landry. He also sang in UNC's top vocal jazz group, the Northern Colorado Voices under the direction of Kerry Marsh and played euphonium in UNC's Wind Ensemble. During his time with Lab 1, the band received the best graduate jazz ensemble award from Downbeat magazine. Zimny has performed with other Downbeat award-winning jazz ensembles as well, including the Folsom High School "A" Jazz Band, Folsom High School "A" Jazz Choir, and the Folsom Middle School Jazz Band.

Zimny recently finished his master's degree at the University of Colorado, Boulder with an MM in Jazz Performance and Pedagogy where he studied with Paul McKee, Dr. John Gunther, Brad Goode, and Jeff Jenkins. Zimny currently works with the Colorado Conservatory for the Jazz Arts as an administrator and educator, has performed with a multitude of artists, toured China and Costa Rica, plays with the Broncos Stampede, performed on cruise ships, and can be heard of the song "Faith" recorded for the popular motion picture Sing.

Jonathan's passion for teaching began when he started teaching brass for the local Drum and Bugle Corps Blue Knights in 2014. He currently teaches for the Phantom Regiment in Rockford, IL but Zimny prefers the one on one teaching experience. There, he is able to give each student the attention they need to not only progress on their instrument, but to grow their understanding of music, and most importantly, to have fun.