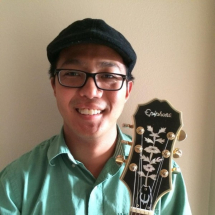 Jesse Sullivan is a guitarist who lives in Seattle, WA. He graduated from the University of Southern California with Cum Laude Honors in 2015. Early on, he was exposed to jazz music when he saw Bruce Forman play at Jazz at Port Townsend about a month after picking the guitar up. After that moment, he has worked hard to become the player he is today, one who deeply is rooted in the tradition of swing and repertoire from the Great American Songbook. Upon arriving at USC, he became the top called accompanist for jazz vocalists in on campus, he became a well rounded musician by playing in rock, R&B, country, and pop bands. He also had the privilege of studying with Bruce Forman, Kathleen Grace, Bob Mintzer, Pat Kelly, Adam Del Monte, Sara Gazarek, and Aaron Serfaty. He is also an experienced teacher. He prides himself in having a very positive demeanor and being a patient teacher with the ability to adjust to different learning styles and specific student goals.

He began teaching beginning guitar lessons to friends and classmates in high school. Ever since he picked up the guitar, he knew it was something that he wanted to pursue professionally because of the joy that it brought him. Being able to share that with other people is something he is very passionate about. He continued teaching beginning guitar and advanced jazz harmony to other guitarists in the music program to help pay tuition in college at USC. He taught at Music and Arts in Redmond during the summer after finishing college before moving to the Bothell store within the same organization. He also began teaching at the Andrew White School of Music around the same time. He teaches all styles of guitar and bass to all levels!

His teaching method is very flexible, as he is very aware that students learning styles and goals vary greatly. He is a patient teacher who will work to help put a student in a position to be successful and achieve his or her goals through lesson plans and teaching methods tailored to meet the student's learning style. Seeing students succeed and have fun making progress and improving as a musician brings him a lot of joy!