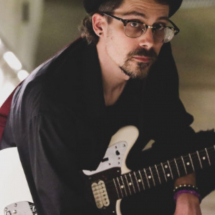 Jesse Ward is a guitarist, composer, and singer-songwriter who grew up in Houston, TX. Inspired by his father, Jesse started playing guitar at the age of 13. Soon after getting his start on the guitar, Jesse discovered jazz music and it quickly became his favorite genre. To grow as a jazz musician, Jesse studied jazz at the High School for the Performing and Visual Arts in Houston, TX, where he also began composing original music. He then continued his music studies at the New England Conservatory in Boston, where he explored and grew in many ways as a performer and composer. Since his time in school, Jesse has branched out into playing many different styles of music aside from jazz, including rock, experimental, and klezmer music.

Jesse primarily teaches guitar, piano, and bass guitar. He views music as a gift that is extremely rewarding to share with others. Jesse’s eclectic musical background and versatile teaching style make for an engaging, informative, and enjoyable lesson experience that his students really enjoy.