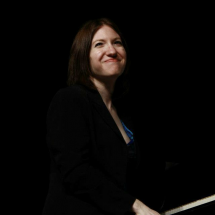 Jennifer Cartney was born and raised in Maryland, where she started studying piano in second grade. In high school, she won the Outstanding Solo Accompanist award for choir at the festival competition in Virginia Beach. She holds a Bachelor of Music Composition with Elective Studies in Theatre Degree as well as a minor in piano from Shenandoah Conservatory in Winchester, Virginia.

Since 2002, Jennifer has directed music and played keyboard for over 50 musicals in the Washington, D.C. area. In 2002, at the age of 23, she worked on two shows for the Sondheim Celebration at the Kennedy Center. Also at the Kennedy Center, she played for the national tours of Elton John's "Aida," "Little Women" and "Wicked." At Signature Theatre in Virginia, she performed in over 25 productions including "Chess," "Hairspray," "Saving Aimee," "The Witches of Eastwick," "Kiss of the Spider Woman," Kander and Ebb's "The Visit" starring Chita Rivera, Disney's "Freaky Friday," and "Titanic." Other D.C. Theatres include Arena Stage, Olney Theatre Center and Ford's Theatre. In 2013, she received a Helen Hayes nomination for music directing "Jacques Brel Is Alive And Well And Living In Paris" at MetroStage. Jennifer has been the solo accompanist for many Broadway performers for the ArtSpeak program, including 6 time Tony Award Winner Audra McDonald. Other regional Theatres include Geva Theatre, New York's Town Hall and Virginia Music Theatre.

Jennifer has taught musical theatre since she was in high school. In Maryland, she taught for Drama Learning Center, Educational Theatre Company, Schoolhouse Theatre Arts and Montgomery College. She also taught for the Papermill Playhouse Summer Conservatory in New Jersey. Many of her former students have gone on to work professionally in theatres around the country. Jennifer also enjoys singing, tap dancing, performing cabarets and recording music.