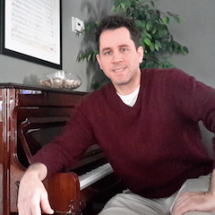 An Atlanta native, Jeff Holsomback began studying piano at age six before switching to drums at age ten. He attended college at Georgia State University, majoring in percussion with a minor in piano performance. After college, a renewed passion for playing piano led him to intensify his study of the instrument and jazz theory under the tutelage of Ted Howe. In 1992 he began his professional career has a pianist.

Since then Jeff has been a regular in Atlanta's music scene, working as a full-time pianist/keyboardist for several award-winning local acts, including The Lost Continentals, Kingsized and Greasepaint. He has had the privilege to open for such artists as Tony Bennett, Martina McBride, Brian Setzer and Tenacious D, and has performed and recorded with Atlanta's own Francine Reed, Tinsely Ellis, Kelly Hogan, Sean Costello, Johnny Knox, The Breeze Kings and Hair of the Dog, as well as national artists Rudy Ray Moore and Kim Wilson.