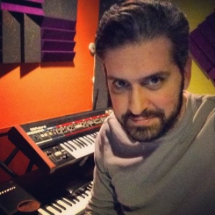 Javier Bermudo is a sound designer, music composer, audio engineer and piano tuner that began his musical training behind the piano at the age of five. Classically trained, in the early 80's he began experimenting with synthesizers and different music genre such as rock, jazz, blues, reggae, electronic, chill-out,, among others. This gave him a solid path to create his own sound and unique approach to the way he perform, compose and produce music.

At the beginning of the 90's he studied Piano Performance and Music Synthesis at Berklee College of Music in Boston. It was here were he perfected his musician skills as well as the craft of music programming. In 1995 he started performing with various artist were he recorded five albums. In 2001 he joined a high end post production recording studio that specialized in music scoring, audio sweetening and custom sound design for documentaries, movies, TV and radio spots. It was in that 2007 he moved to South Miami as chief audio engineer, sound designer and video editor for a major post audio recording studio that specialized in music and sound effects recreation, dialogue dubbing, mixing and mastering for big networks such as Showtime, MTV, Nickelodeon, HBO among others.

In 2011 Javier was hired by Apple Inc. to provide basic and advance software and music training to customer and staff. This was when he discovered that teaching and sharing his knowledge was something that he will be pursue from now on. Currently, Javier works from his personal studio recording studio composing, editing and mixing audio for the post production industry. At the same time, he's teaching piano lessons as well as servicing and repairing pianos in the Miami area.